Google has been busy churning out the holiday-themed info-reports on 2011 search trends. Christmas trends came out a couple of days ago, and now it’s Halloween’s turn. According to Google’s October 2011 data from Google Insights for Search, Halloween revelers are ready to party with a focus on sugar, snacks and booze.

END_OF_DOCUMENT_TOKEN_TO_BE_REPLACED

Google Keyword Tool is a window into the world’s innermost desires. Often the keywords reported are mundane and predictable: [hotels at disney], [disneyland restaurants], etc. Some days, however, I’m struck by a particular phrase and the intent behind it. To the keyword phrases that brighten my days I dedicate this “As Seen on GKT” column.

Today’s As Seen on GKT: [disneyland bar] and [club at disneyland] 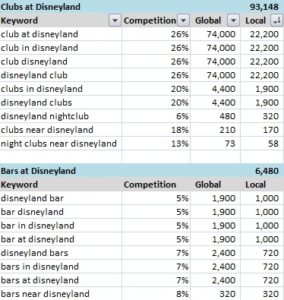 People go to Disneyland to have a good time. For some people having a good time is synonymous with partying, and for others it means photos of the kids with Snow White. These two search phrases show different sides of the “having a good time” coin, which is what fascinates me most.

What I found interesting overall is that “club” keywords associated with “disneyland” outweigh “bar” keywords 14:1. Some of those “club” searchers may be looking for travel clubs, fan clubs or book clubs, but if that was the intent it’s more likely they’d search for the “disney” brand overall than the “disneyland” theme park. We’ll just agree that there may be some intent contamination in the “club” searcher data set, but even so it appears far more people want to find clubs than bars at Disneyland.
Which frankly cheers me up more than it should, really. It’s rather life affirming to think that there are more celebratory intent searches than “I can’t bear my family vacation” searches. So let’s all have a drink to Mickey and the crew.

Google Keyword Tool is a window into the world’s innermost desires. Often the keywords reported are mundane and predictable: [palm springs hotels], [hotels in palm springs], [cheap palm springs hotels]. The relative search frequencies for variations on search terms are occasionally interesting, but usually the terms themselves are pretty predictable. Some days, however, I’m struck by the oddity of a phrase that I see in the reports. To the keywords that brighten my days I dedicate my new “As Seen on GKT” column.

My favorite aspects of this phrase: